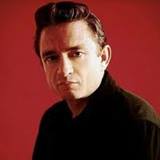 Johnny Cash will have a new album in 2014 with never-before heard tracks. The world will get the new Johnny Cash album on March 25 with “Out Among the Stars” which includes twelve recently discovered studio recordings. The tapes used for the release are from a 1981 session recorded at Columbia Studios in Nashville and a 1984 session at 1111 Sound Studios, both of which were produced by Billy Sherrill.
Backing Cash was a young Marty Stuart on guitar and mandolin and Nashville A-Team members Jerry Kennedy (guitar), Pete Drake (steel guitar), Hargus ‘Pig’ Robbins (piano) and Henry Strzelecki (bass). The album also includes duets with Cash’s wife, June Carter Cash, and close friend Waylon Jennings.
The recordings, which are not demos, outtakes or alternate versions, first surfaced in 2012, when John Carter Cash, along with the Cash experts at Legacy, were cataloging his father’s and mother’s exhaustive archives in Hendersonville, Tennessee, and at the Sony Music Archives. ‘When my parents passed away, it became necessary to go through this material,’ he says. ‘We found these recordings that were produced by Billy Sherrill in the early 1980s . they were beautiful.’
John Carter Cash, along with co-producer and archivist Steve Berkowitz, enlisted Marty Stuart, Buddy Miller and Carlene Carter, as well as other master musicians, to collaborate in restoring the album at the Cash Cabin Studios in Hendersonville, TN.

Shortly after it aired on Tuesday morning, CBS began to receive comments about what viewers said was an inappropriate use of Toto's hit Africa during the memorial service for Nelson Mandela. On Wednesday, Toto keyboard player and frequent "Lost 45s" guest David Paich released a statement with his own condemnation of the network's choice of music. "CBS This Morning utilized "Africa" as the audio bed for a segment they aired this morning. As the co-writer of the song, if I […]