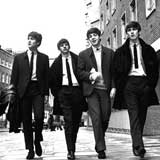 The Recording Academy has announced their list of special merit awards for 2014. The artists, executives and technicians will be honoured at a special invitation-only ceremony on Saturday, January 25 and will be formerly recognized the next night during the Grammy Awards ceremony.
It’s hard to believe, but the Beatles have never been recognized by the Academy with its Lifetime Achievement Award. They are included on this year’s list of individuals and groups being honoured which also includes the Isley Brothers, Kris Kristofferson, and Kraftwerk,
The Trustees Award, which honors non-performers who have made contributions of outstanding significance, will go to FAME Studios owner and record producer Rick Hall, Marshall Amps founder Jim Marshall and film composer Ennio Morricone.

Voting has ended for the public's one vote on this year's Rock and Roll Hall of Fame Ballot. Their selection will be included with the other 500+ voting members in the selection of the final five inductees for 2014. A total of 1,390,504 votes were received with KISS taking the most at 239,417 (17.2%) followed by Nirvana, Deep Purple, Yes and Daryl Hall and John Oates. Those five artists will receive the vote from the public. With the exception of […]