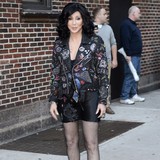 Cher urges her fans to “never give up” on their dreams. The 67-year-old diva took to Twitter on Wednesday, wishing her followers a Happy New Year with the hope her bright outlook might be contagious.
“I Honestly Hope this is Your Best year EVER! If u r Young or Old, it Doesn’t Matter. Dreams CAN’T COUNT. NEVER GIVE UP! NEVER 4 GET U R VALUABLE,” Cher tweeted, adding earlier, “BELIEVE U R SPECIAL, Because U R.”
The pop star has a big year ahead. Cher has been busy promoting her album “Closer to the Truth,” her first release since 2001. Her 49-city Dressed to Kill US tour is scheduled to kick off March 19 in Northampton, Pennsylvania and she’s said fans can expect a wild show.
Cher recently revealed she has more energy than ever and can still squeeze into her famous fishnet bodystocking from the music video for her 1989 hit “If I Could Turn Back Time.” Speaking to UK newspaper “The Sun,” Cher said: “People love that I can still wear it on stage. I wore it for my shows in Las Vegas [from 2008 to 2011]. A friend said to me that a woman is sexy while she can still put on her stockings,” she continued, musing, ‘I thought: I can do better than that, I can still put on my body stocking’. They’ll probably even dress me in it when I’m dead.”

Mr. Meat Loaf is returning to action less than 12 months after hanging up his bat. Meat Loaf will head to Las Vegas in February for a 24-date residency at Planet Hollywood Resort and Casino for Rocktellz & Cocktails. In May, 2013, Meat Loaf announced he would no longer tour due to the 'nightly stress' but a stable location such as Vegas allows him to continue to perform. The Rocktellz & Cocktails format is the full-on rock concert mixed with […]