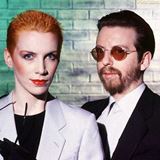 The Eurythmics will be doing it for The Beatles and for the CBS/Grammy special “The Night That Changed America: A Grammy Salute to the Beatles.” on February 9th. Annie Lennox and Dave Stewart will reunite as Eurythmics for the one-night only event.
The program will commemorate the 50th anniversary of one of the most historic moments in music and television. Featuring today’s top artists covering songs performed by the Fab Four that momentous evening in 1964 and other Beatles classics through the years, the show also will include footage from that landmark Sunday night, as well as other archival material. In addition, various presenters will help highlight and contextualize the musical, cultural and historical impact of the group and this legendary performance.
Lennox and Stewart first split in 1990 but have reunited to record their 1999 album “Peace” and in 2005 to record a new track for a Eurythmics hits set. “The Night That Changed America: A Grammy Salute to the Beatles” airs on Sunday, February 9 at 8 PM, fifty years to the day after the Beatles’ U.S. premier on the Ed Sullivan Show.

Fleetwood Mac have played their first show since bass player John McVie announced he had been diagnosed with cancer. McVie was diagnosed in October forcing the cancellation of the Australian leg of the Fleetwood Mac tour which was due to begin in Sydney two weeks later on November 10. John McVie joined Fleetwood Mac on Monday, December 30 for the band's first show October 26 at the MGM Grand Garden Arena in Las Vegas. The band also played at a […]