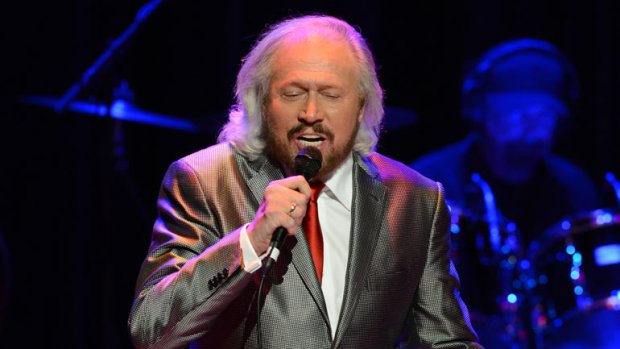 The Bee Gees celebrated their 50th anniversary four years ago, and the last surviving member of the group, Barry Gibb, will continue the celebration when he hits the road this spring. Gibb will kick off “Mythology: The Tour Live” on May 15 in Boston, MA. The six-date trek will make stops in New York, Chicago, Philadelphia and Boston, before finishing out at Los Angeles’ Hollywood Bowl on June 4.
Gibb will be joined by his eldest son, Stephen and his niece, Samantha Gibb, whose father was fellow Bee Gee Maurice Gibb, who passed away in 2003. Barry’s younger brother and Maurice’s twin, Robin passed away in 2012 after a year-long battle with colorectal cancer.
In 2010, the band released Mythology, a four disc box set that highlights the brothers career from 1966-2001, to celebrate 50 years in music.
Check out the full list of tour dates, as of (1/30/14) below.
Mythology: The Tour Live:
5/15 – Boston, MA @ TD Garden
5/19 – Philadelphia, PA @ Wells Fargo Center
5/23 – Wantagh, NY @ Nikon At Jones Beach Theater
5/27 – Chicago, IL @ United Center
5/31 – Concord, CA @ Concord Pavilion
6/4 – Los Angeles, CA @ Hollywood Bowl

Smokey Robinson, the Motown songwriting legend, has been awarded the Music For Life Award by NAMM (National Association of Music Merchants) during their annual convention, currently going on in Anaheim, CA. Robinson was recognized for his five decades in the music business and his role in starting Motown Records. NAMM President and CEO Joe Lammond said "So much of what we at NAMM stand for is exemplified in the career and life of the legendary Smokey Robinson. His influence on […]