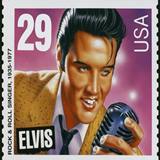 The Elvis Presley postage stamp is to be reissued along with James Brown, Jim Morrison, Sam Cooke & many more.
The Washington Post linked to a document that they received that includes the current plans from the “Citizen’s Stamp Advisory Committee.” On that list are numerous upcoming commemorative stamps saluting music icons from pop, rock, R&B and country.
There is a bit of confusion over the status of an upcoming Elvis Presley release. According to the article in the Post, the post office will be reissuing the Presley stamp from 1993 which is the best selling stamp in the country’s history; however, the leaked list shows it as a new issue and not in the reprint column. We’ll have to wait until next year to see whether we get 50’s Elvis, 70’s Elvis or something in-between.
In the meantime, here are all of the artists and other music related subjects which appear on the Citizen’s Stamp Advisory Committee list: Elvis Presley (re-issue), James Brown, Janis Joplin, Jimi Hendrix, Jim Morrison, Sam Cooke, Tammy Wynette, Freddy Fender, John Lennon, Roy Orbison and Michael Jackson.

Devo guitarist Bob Casale died Monday, his brother and band mate announced Tuesday. Casale was 61. He was known by fans as "Bob 2" since he played alongside guitarist Bob Mothersbaugh, the brother of Devo co-founder Mark Mothersbaugh. "As an original member of Devo, Bob Casale was there in the trenches with me from the beginning," his brother Gerald Casale said in a Facebook posting. "He was my level-headed brother, a solid performer and talented audio engineer, always giving more […]