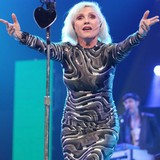 Debbie Harry believes artists sometimes have to take a stand. The legendry Blondie singer thinks that working as a recording artist can be a struggle.
“You have to take a stand. It’s a toss-up between being in a business and being an artist. Sometimes you have to hold your ground and refuse to do what’s expected of you, even if it could make you money,” Debbie explained to NME magazine. “I don’t know how many times we were told, do another song like “Heart of Glass.” It’s impossible to really do that. I’ve seen artists come out with a second song after they’ve had a big hit, and then they try to replicate it with a follow up song, and it usually just falls flat.”
Far from dropping off the scene, Blondie have been making new music since their debut album in 1976. Although Debbie concedes that at times it would have been easier to rely on their older sound, she’s a big advocate of making new music” “I think it’s more of a challenge to be creative and do something that you like instead of taking the easy way out and doing another “Heart of Glass.” I’m always inspired by new technology. I think it’s really exciting and wonderful.”
The now 68-year-old singer continues to pioneer new sounds, as well as keeping up her trademark bold fashion statements.Despite over 40 years in the industry, Debbie confesses that notoriety was never something she set her sights on. “My idea of fame was to be a beatnik – not mega stardom,” she smiled.

Billy Joel will release his Russian recordings in May. Columbia/Legacy will release "A Matter of Trust: The Bridge to Russia" by Billy Joel on May 20. The set adds twelve tracks not on the original 1987 live release, while the documentary is an update of Live in Leningrad 1987 which hasn't been seen since its original VHS release. The Deluxe Edition adds a book with rare photographs and new liner notes. From the press release: time dream of performing for […]