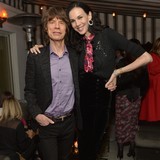 The Rolling Stones have cancelled the first show of their Australian tour. Lead singer Sir Mick Jagger is currently grieving following the death of his long-term fashion designer partner L’Wren Scott. She was found dead of an apparent suicide in her New York City apartment yesterday. Mick and his bandmates touched down in Australia yesterday, where they were due to commence shows tomorrow. It has now been confirmed they will not take to the stage in Perth.
“No further information is available at this time, ticket holders are asked to hold on to their tickets until a further update is available,” promoter Frontier Touring said in a statement.
Following the news of L’Wren’s passing, Mick’s representative said he was “completely shocked and devastated” by her death. The MailOnline has published a photograph of him looking shaken as he leaves a Perth restaurant, apparently shortly after he had received the news. The rocker had been dating 49-year-old L’Wren since 2001 and has been forced to rubbish speculation they were not together at the time of her death.
“Everybody who knows L’Wren and Mick are totally and completely shocked. Neither of them drink and do drugs, and they were always really affectionate with each other. There were no signs of problems in their relationship,” a source told MailOnline.
The designer’s body was discovered by her assistant at 10am local time, with claims she had texted the person to come to her property at 8.30am. Reports claim L’Wren had hanged herself with a scarf from a doorknob, although an official report hasn’t been released yet. There was no suicide note at the scene.

Peter Callander, a British songwriter who provided lyrics for some of your favorite "Lost 45s" of the 60s and 70s like “The Night Chicago Died” and “Billy, Don’t Be a Hero,” died on Feb. 25 in Haresfield, Middlesex, England. He was 74. The cause was a heart attack, his wife, Connie, said. His songs were recorded by singers like Tom Jones, Cliff Richard and Cilla Black. Wayne Newton reached No. 4 on the Billboard singles chart in 1972 with his […]