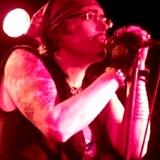 Adam Ant has recruited original drummer, Dave Barbarossa and bass player Leigh Gorman to join his brand new band, entitled: ‘The Ministers Of New Super Heavy Funk Punk.’
The band also features two members of his current band, Jola ‘ drums and Tom Edwards ‘ guitar, implemented by Will Crewdson ‘ guitar. Dave Barbarossa and Leigh Gorman (and Adam) were the very last line-up to perform the Dirk Wears White Sox album live at the Electric Ballroom, London on 31st December 1979, prior to Malcolm McLaren poaching Barbarossa and Gorman for Bow Wow Wow and prior to Adam, forming Adam And The Ants 2 and going onto enjoy global success.
Last year Adam released his highly acclaimed, “Adam Ant Is The BlueBlack Hussar In Marrying The Gunners’s Daughter,” on his own BlueBlack Hussar Record label. Supporting the release with a forty-four city US tour, last summer, which was the culmination of over 300 live shows, Adam has performed across the world, since the summer of 2010. Last year Adam also appeared on the Oprah Winfrey & Late Night with Jimmy Fallon shows.

Christine McVie’s long-awaited return to Fleetwood Mac became tangibly real with the announcement of a new world tour to kick off in September in Minneapolis. Thirty-four concerts in 33 North American cities will follow, marking the band’s first full dates with McVie since 1998. The upcoming set list for the tour, dubbed ‘On With the Show,’ is still being worked out. But McVie — a member of the group for some three decades — voiced a number of Fleetwood Mac’s […]