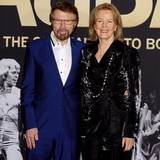 Björn Ulvaeus and Frida Lyngstad of ABBA have revealed how they dealt with performing with their former spouses after they split. The two iconic musicians started the quartet as two married couples with respective partners Agnetha Fältskog and Benny Andersson, but both split up before the group dissolved in 1981.
Currently promoting a reissue of their greatest hits, both Björn and Frida have revealed the heartache they had to go through in order to keep the band together.
“We felt like we had something so valuable in the group that, even though it was difficult, we didn’t want to break that up. And to prove it, we did some of our best stuff after that,” Björn told UK newspaper The Guardian, explaining the bleak lyrics of If It Wasn’t for the Nights were a direct reflection of his own state of mind. “There were times that last autumn I was with Agnetha that I had those nights myself. My lyrics were often based around fiction, but that must have been where that one came from.”
“Well when you did it, you made sure you did it very professionally,” Frida added when asked how it felt to sing about her failed marriage. “Of course there was a lot of emotion behind it and it was not always easy to continue recording.”
The Swedish songstress also revealed that while she didn’t feel she could leave the hugely successful band, she found another way of coping with her internal distress about the separation from Benny.
“I changed my whole style. I cut my hair very short, you know, very spiky and I became another woman in a way. So it manifested itself mostly like that,” she said.

Arthur "Guitar Boogie" Smith, the multi-instrumental country musician who wrote the song that would become "Dueling Banjos" (later the theme from "Deliverance") died at his home on Thursday at the age of 93. Smith was a very active composer with over 500 copyrights including his 1955 piece "Feudin' Banjos" which he recorded with Don Reno. In 1972, the song was performed as "Dueling Banjos" by Eric Weissburg and Steve Mandel for the movie "Deliverance," going on to reach number 2 […]