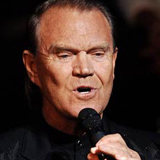 Music icon Glen Campbell has been moved into an Alzheimer’s care facility. Campbell, 78, announced that he was suffering from Alzheimer’s Disease in 2011 and, since that time, has recorded a final album (“Ghost in the Canvas”) and mounted a farewell tour. A second album, “See You There,” was also assembled from the sessions for Canvas.
A family spokesperson told People “He was moved to an Alzhemier’s facility last week. I’m not sure what the permanent plan is for him yet. We’ll know more next week.”
A documentary on the singer’s farewell tour and his family’s dealings with the progressing disease will premier on Friday at the Nashville Film Festival.
Campbell, who played with the Los Angeles studio musicians The Wrecking Crew early in his career, has released 54 studio albums and scored five number 1 country singles (I Wanna Live (1968), Wichita Lineman (1968), Galveston (1969), Rhinestone Cowboy (1975) and Southern Nights (1977)).

Debbie Gibson hasn't been well for over a year yet it is only recently that she found out why. Gibson took to her webpage on Wednesday to write about her long fight with sickness, weight loss and other physical problems that had her at the end of her ropes. She first noticed changes in early 2013, especially with feelings of anxiousness and bad food sensitivities. That was followed with nerve pain, muscle fatigue and a debilitating bad back. Because of […]