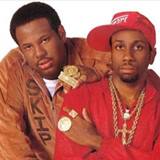 DJ E-Z Rock, who hit the Dance top ten in 1988 with partner Rob Base on “It Takes Two,” has died at the age of 46. No details have been announced on how the hip-hip artist, born Rodney Bryce, died, although the site AllHipHop News has stated that he had been ill and died of a “massive stroke”. The news was announced on Twitter by Biz Markie (“R.I.P. TO EZ ROCK FROM ROB BASE AND EZ ROCK YOU WILL TRULY BE MISSED..” and confirmed to Rolling Stone by Base.
Rob Base and DJ E-Z Rock, friends in Harlem since fourth grade, released their first single, “DJ Interview,” in 1987. Word of mouth brought them to Profile Records in 1988 where they released their first major, “It Takes Two.” The song went big, especially on the streets and in the clubs, going to number 3 on the Dance chart, 17 on R&B and 36 on the Hot 100. The single, plus the album of the same name went Platinum.
They followed up with Get On the Dance Floor (1988 / #1 Dance / #6 Rap) and Joy and Pain (1988 / #58 Pop / #11 R&B / #9 Dance / #5 Rap), cementing them as one of the most innovative stars on the rap circuit. Their sound was a mix of multiple genres and stayed away from rap-only lyrics, using samples from artists like James Brown and Maze Featuring Frankie Beverly, bringing the hip-hop sound more to the mainstream.

"Beautiful: The Carole King Musical" was nominated for seven Tony Awards on Tuesday including Best Musical, Actress, Supporting Actor and Supporting Actress. "Beautiful" was made with the blessing of King who originally chose not to see the show, claiming she didn't need to relive those years. Carole eventually relented and is now a fan of the show. According to sources, she will attend the Tony's on June 8. The nominations: Best Musical Best Book of a Musical ' Douglas McGrath […]