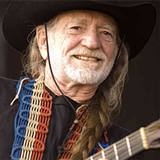 Willie Nelson will release, by one source, his 69th studio album on June 17 with Band of Brothers. The album also marks the first time in nearly two decades that Nelson has recorded an album that was mostly written by him. Nine of the fourteen songs on the set were penned in part or wholly by Nelson with the balance being interpretations of music by Billy Joe Shaver, Billy Burnette and Vince Gill.
Working again with producer Buddy Cannon, who helmed Willie's first three Legacy releases, and a band featuring Jim 'Moose' Brown (keyboards), Eddie Bayers (drums), Kevin 'Swine' Grantt (bass), Bobby Terry (guitar), Tommy White (steel guitar), Mickey Raphael (harmonica) and Trigger (Willie's guitar), Willie recorded the bulk of Band of Brothers during sessions at Sound Emporium Studios in Nashville with additional recording at Pedernales Studio, Austin, Texas and The Hit Factory Criteria, Miami, Florida. Recording sessions took place between October 2013 and March 2014.

Billy Joel says heroin 'scared' him. The 64-year-old star revealed his past drug use in a new interview in front of 150 people in a New York City town hall setting, where Billy discussed his career, family and childhood. The "Piano Man" singer's heroin experience was the inspiration behind the song "Scandinavian Skies" from his 1982 album "The Nylon Curtain," with the star admitting the drug 'scared' him. In addition, Billy revealed that he almost formed a supergroup with fellow […]