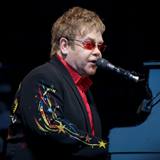 Elton John spoke to Billboard to discuss recording a duet with Smokey Robinson for an upcoming album. A a teenager collecting soul records, John recalls he was awed by Robinson’s “most amazing voice” and lyrics that were “so great and direct; so simple and heartfelt. I think Bob Dylan described him as America’s greatest poet. [Robinson] says things in five words that people take a whole page to say.”
Smokey Robinson is partnering with an all-star slate of guests — including Elton John and James Taylor — for “Smokey & Friends.” Verve Records will release the duets album this September.

Sometime during their relentless touring, the Eagles have evidently entered the studio and recorded some new music, at least according to member Joe Walsh. Walsh recently talked with Billboard, telling them that there is new music "in the can" but didn't comment when it was recorded or if the band had any intention of releasing any of it. Joe is obviously making up for lost time from his alcohol and drug addictions that he kicked in the late-80's. He's not […]