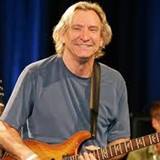 Sometime during their relentless touring, the Eagles have evidently entered the studio and recorded some new music, at least according to member Joe Walsh. Walsh recently talked with Billboard, telling them that there is new music “in the can” but didn’t comment when it was recorded or if the band had any intention of releasing any of it.
Joe is obviously making up for lost time from his alcohol and drug addictions that he kicked in the late-80’s. He’s not only part of the Eagles juggernaut but also says he has recently recorded with the Foo Fighters, added guitar to a track on the upcoming album by War and has his own blues album that he is readying for eventual release.

Michael Jackson gave a posthumous performance at the Billboard Music Awards. The late star's hologram appeared on stage at the MGM Grand Garden Arena in Las Vegas Sunday night, shortly after the May 13 release of his album, Xscape. The hologram performed "A Slave to the Rhythm" from the chart-topping record, which features eight songs and guest vocals by Justin Timberlake. Billboard Music Awards executive producer Larry Klein told The Hollywood Reporter the show was 'one of the most amazing […]