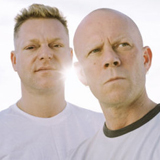 ERASURE (Vince Clark and Andy Bell) have confirmed a 15-date UK tour for November/December. It will follow the release of their new album, “The Violet Flame,” which is due out on September 22nd. Recorded in New York and London and produced by Richard X, “The Violet Flame” follows 2013’s critically acclaimed Snow Globe, and is the band’s sixteenth studio album release. The first single from the 10-track album will be released in mid July.
The album will be available alongside exclusive Erasure bundles including single, deluxe and box set formats as well as a VIP ticket bundle which will feature the album, premium ticket and meet and greet with the band.
Formed nearly 30 years ago, the award-winning songwriting duo of Vince Clarke and Andy Bell unleashed on the nation a succession of both influential and chart-topping pop anthems of the ’80s, ’90s through to today. Songs like ‘A Little Respect’, ‘Sometimes’, ‘Victim Of Love’, ‘Ship Of Fools’, ‘Blue Savannah’, ‘Star’, ‘Chains Of Love’, ‘The Circus’, ‘Who Needs Love (Like That)’, ‘Love To Hate You’, ‘Drama!’, ‘Always’ and ‘Breathe,’ ensured a formidable presence on the singles charts complemented by five consecutive UK No 1 albums (including The Innocents, Wild! and Chorus) and the beginning of the worldwide Abba revival, ‘Abba-esque’.

Elton John spoke to Billboard to discuss recording a duet with Smokey Robinson for an upcoming album. A a teenager collecting soul records, John recalls he was awed by Robinson's "most amazing voice" and lyrics that were "so great and direct; so simple and heartfelt. I think Bob Dylan described him as America's greatest poet. [Robinson] says things in five words that people take a whole page to say." Smokey Robinson is partnering with an all-star slate of guests -- […]