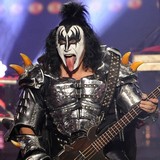 Gene Simmons thinks the secret to longevity is gratitude. The iconic Kiss member is well known for his black and white face paint, and exceptionally long tongue, but it’s his attitude that has kept his career fresh for the past four decades. This year marks the 40th anniversary of Kiss, who although formed in 1973, didn’t put their debut album out until a year later. To celebrate, the band have released Kiss 40, a compilation of their most memorable songs on an aptly 40-tracked CD.
“It’s to do with understanding that you’re blessed and you love what you’re doing,” Gene answered when British magazine Kerrang! quizzed him on the secret to the band’s enduring popularity. “It’s meant getting rid of members who where self-destructive, but Paul [Stanley, guitar] and I have a 40-plus-year relationship, and there’s never been a raised voice. We disagree all the time but there’s a mutual respect.”
The original line-up included Ace Frehley and Peter Criss but after various changes Kiss is now represented of Gene, Paul, Tommy Thayer and Eric Singer. Gene confesses that he had a very hands-on approach when putting their latest offering together, as he felt his name was at stake should it go wrong.
“My name is Gene Simmons but it might as well be Kiss. Your reputation precedes you, so a package that doesn’t come up to scratch reflects back on us. If it has Kiss on it, it has to have that bang-for-the-buck quality. And size does count,” he laughed.

Dolly Parton thinks Scarlett Johansson could play her in a movie because she's "full bosomed". The 68-year-old country singer has been in the music industry for decades and has also dipped her toe into acting over the years. Giving hints about an upcoming biopic based on her, Dolly shared why she thinks Scarlett would make a good candidate. "Well, you know what, I'm doing a musical of my life story - and I'm also doing a movie version!" she told […]