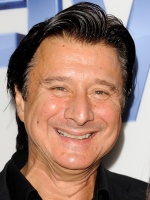 It’s safe to say that every Journey fan probably wishes they were at the Eels concert in St. Paul, Minnesota, on Sunday. The lucky people who were there got to witness a surprise performance by former Journey frontman Steve Perry, who hasn’t been on stage for nearly 20 years. Perry made a triumphant return to the stage on Sunday night when he joined the band for impromptu, pitch-perfect renditions of classics “Open Arms” and “Lovin’, Touchin’, Squeezin.”
The concert marked his first public performance since the late 1990s. The singer quit Journey in 1986 but briefly reunited with the group a decade later. His name has been back in the news recently after he revealed he was discussing a possible comeback with his former bandmates. However, guitarist Neal Schon insists a reunion is no longer a talking point, explaining, “I think when Steve mentioned that, when somebody put him on the spot and asked him, we had been [communicating] with email, just saying, ‘Hello, I hope you’re well,’ all that. “He opened the door and shut the door. It wasn’t anybody but him that created all that media for a second, and so we do want to reassure the fans that no, [current frontman] Arnel [Pineda] has not gone anywhere. He’s still right here with us.”

Angela Bassett is 'beyond excited' to direct a forthcoming Whitney Houston biography. The "I Will Always Love You" singer perished in her room at The Beverly Hilton hotel in 2012. Television network Lifetime is creating a movie on Whitney's life with ex-husband Bobby Brown and Angela has expressed her sentiments on being appointed the film's director. "I have such regard for both Whitney's and Bobby's amazing talents and accomplishments; and I feel a responsibility in the telling of their story," […]