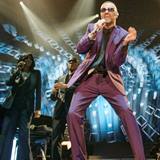 George Michael has been rushed to the hospital. The 50-year-old Careless Whisper singer is said to have fallen ill last week, which caused him to collapse in his Highgate, North London home. A spokesperson for the London Ambulance Service confirmed to British newspaper The Mirror two units were sent to George’s neighbourhood last Thursday after a friend called emergency services for help.
‘We were called just before 8am on May 22. We sent two ambulance crews and staff treated one patient, a man, who was then taken to hospital,’ the representative stated. Witnesses told the publication emergency services left the home with George in tow around noon, four hours after they arrived at his house midmorning.
George’s agent refused to comment on whether the musician has been released from medical care and she also kept mum on whether drugs were involved in the situation. She also declined to make a statement on why it took two ambulances to safely transport him to hospital. ‘George Michael was in hospital for routine tests but there is nothing further to say,’ his representative said.
George drove his car into a storefront in July 2010, and he later served four weeks in prison for his DUI. Following this incident the singer experienced a number of harrowing near-death events, including being unconscious for three weeks in December 2011 after falling ill with pneumonia. In May 2013 George fell out of his moving vehicle while driving on a motorway in the UK, which resulted in a head injury.

It’s safe to say that every Journey fan probably wishes they were at the Eels concert in St. Paul, Minnesota, on Sunday. The lucky people who were there got to witness a surprise performance by former Journey frontman Steve Perry, who hasn’t been on stage for nearly 20 years. Perry made a triumphant return to the stage on Sunday night when he joined the band for impromptu, pitch-perfect renditions of classics "Open Arms" and "Lovin', Touchin', Squeezin." The concert marked […]