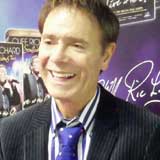 When Morrissey cancelled the balance of his North American tour, he took his New York date, which was to feature Cliff Richard as the opening act, down with him. Richard almost immediately expressed his disappointment in not being able to play the show but, as of Monday, has come up with an excellent replacement. Cliff will now play a free show on Saturday Night at the Gramercy Theatre at 127 E. 23rd Street in New York. The original show was to be at the Barclay’s Center in Brooklyn.
Those with proof of purchase of tickets for the Barclay show can gain admission starting at 6:30 on a first-come-first-served basis. Those who don’t have proof will be able to try for general admission starting at 7:15, also first-come-first-served. The show starts at 8:00. According to Richard’s website: “This will be an intimate evening with Sir Cliff.”

One of my heroes has passed away. Without him, I would not have learned many facts or chart positions for "The Lost 45s" at lost45.com. The legendary Casey Kasem, who was literally the voice of a generation as host and co-creator of the AMERICAN TOP 40 syndicated radio show, has died at age 82 after complications from Lewy Body Dementia, a degenerative condition similar to Parkinson's Disease. Daughter Kerri: "Early this Father’s Day morning, our dad Casey Kasem passed away […]