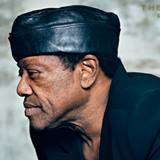 Bobby Womack, one of the legends of soul and a guest on “The Lost 45s,” has died at age 70. At this stage Womack’s cause of death has not been announced although in March he revealed he was suffering from colon cancer and undergoing surgery.
Bobby Womack was inducted into the Rock and Roll Hall of Fame in 2009 after a 50 year career that not only included performing and recording but also songwriting. In his acceptance speech he said, ‘I wish I could call Sam Cooke and share this moment with him. This is just about as exciting to me as being able to see Barack Obama become the first black President of the United States of America! It proves that, if you’re blessed to be able to wait on what’s important to you, a lot of things will change in life.’
Womack wrote The Rolling Stones first number one hit ‘It’s All Over Now’ and gave Australia’s Wendy Matthews one of her biggest hits in ‘Woman’s Gotta Get It’ in 1991. James Taylor also recorded the song for his ‘In The Pocket’ album. In recent years Womack recorded with Damon Albarn in Gorillaz and toured with Gorillaz on the Australian shows in December 2010.
Bobby Womack started his career in the early 60s as backing singer for Sam Cooke. As a guitarist he played on many of Aretha Franklin’s recordings including her classic ‘Lady Soul’ album. Womack’s first hit was ‘Lookin’ For A Love’ with his sibling group The Valentinos in 1962. The group featured Cecil, Friendly, Curtis, Harry and Bobby Womack. ‘Woman’s Gotta Have It’ was his first number one soul single in 1972. His other hits included the million selling “Harry Hippie” and “Nobody Wants You When You’re Down and Out.” He also wrote the instrumental “Breezin'” a hit for George Benson.
Womack’s last album was ‘The Bravest Man In The Universe’ in 2012. The album was produced by Damon Albarn and featured appearances from Lana Del Rey, Gil Scott-Heron and Fatoumata Diawara. He was working on a new album with guest appearances from Rod Stewart, Stevie Wonder and Snoop Dogg at the time of his death.

Diana Ross is supposedly performing the day her son Evan marries Ashlee Simpson. The music icon is mother to the 25-year-old "Hunger Games" actor, who became engaged to Ashlee in January. And according to E! News, The Supremes singer will grace the stage during their forthcoming nuptial ceremony. Apparently Diana's daughter Rhonda Ross Kendrick is set to serenade her brother Evan as well, as she is rumored to be singing alongside her mom during the future performance. The outlet reports […]