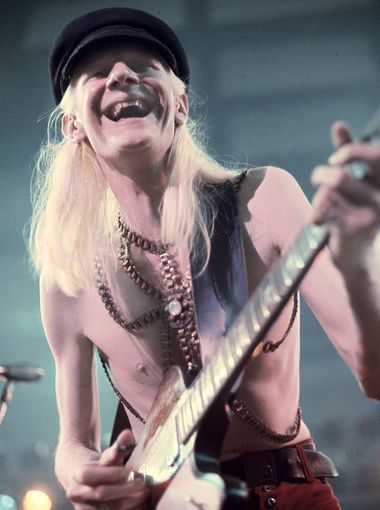 Guitarist, singer and music producer Johnny Winter has died at age 70. Winter rose to fame in the late 1960s and ’70s with his performances and recordings that included producing his childhood hero Muddy Waters.
“I love blues. I don’t mind a little rock and roll, too, as long as it’s blues-based rock and roll,” he told Guitar World in 2010. He was the older brother of Edgar Winter — also a music legend.
Winter’s representative, Carla Parisi, confirmed Thursday to the Associated Press that Winter died Wednesday in a hotel room in Zurich. A Facebook note says “his wife, family and bandmates were all saddened by the loss of one of the world’s finest guitarists.”
He had been on an extensive tour that took him to Europe for his last performance Saturday at the Lovely Days Festival in Wiesen, Austria. He performed in May at the annual Jazz Fest in New Orleans.
Winter, who was born in Beaumont, Texas, showed his gift for music at an early age. At 4, he played the clarinet. At 11, the ukulele. He and Edgar often appeared as a duo on children’s TV shows and talent contests. Johnny formed his first band when he was 15 and was making records at 18. But he battled health and substance abuse issues through the years.

David Bowie has made a statement indicating that new music may be coming in the near future. A charity event was held on Saturday night at London's 12 Bar celebrating fifty years of David Bowie's music. During the evening's proceedings, a note that was supposedly from Bowie was read to the crowd: "This city is even better than the one you were in last year, so remember to dance, dance, dance. And then sit down for a minute, knit something, […]