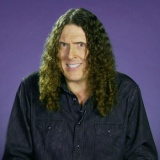 Weird Al Yankovic could be headed for the number 1 spot for the first time in his career. Early sales as analyzed by Hits Daily Double show Yankovic’s new album, “Mandatory Fun,” selling 80,000 to 85,000 copies in its first week of release, about seven to eight thousand more than its closest competitor, Jason Mraz’ YES!
If the numbers hold it will give Yankovic the first number 1 album of his career. The closes he has ever come is with his last album, 2011′s “Alpocalypse,” which went to number 9.
There is a very good chance that those numbers will hold, if not increase, as Al releases four new videos from the album over the next four days. The first four videos, released Monday through Thursday, have been viewed over ten million times on the four websites that received exclusives. His Tuesday video, “Word Crimes” (based on Robin Thicke’s Blurred Lines) is already at 5.5 million views on YouTube.

Guitarist, singer and music producer Johnny Winter has died at age 70. Winter rose to fame in the late 1960s and '70s with his performances and recordings that included producing his childhood hero Muddy Waters. "I love blues. I don't mind a little rock and roll, too, as long as it's blues-based rock and roll," he told Guitar World in 2010. He was the older brother of Edgar Winter — also a music legend. Winter's representative, Carla Parisi, confirmed Thursday […]