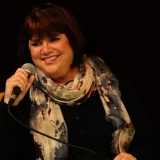 Linda Ronstadt has been selected to receive the National Medal of Arts next Monday at the White House. The National Medal of Arts is the highest award in the U.S. given to artists and arts patrons by the federal government. Next Monday’s ceremony will be hosted by President Obama with Michele Obama in attendance and will be streamed live at 3 PM via WH.gov/Live.
Ronstadt was selected ‘for her one-of-a-kind voice and her decades of remarkable music. Drawing from a broad range of influences, Ms. Ronstadt defied expectations to conquer American radio waves and help pave the way for generations of women artists.’
Linda will reportedly make the trip to Washington, a rarity these days since her announcement last year that she is suffering from Parkinson’s Disease. Ronstadt did not attend her recent induction into the Rock and Roll Hall of Fame. Also being honored is Albert Maysles who, with his brother David, documented the infamous Rolling Stones 1969 show at Altamont in the documentary Gimme Shelter.
The rest of the honorees are novelist Julia Alvarez, the Brooklyn Academy of Music, arts patron Joan Harris, choreographer Bill T. Jones, Broadway composer John Kander, director and CEO Jeffrey Katzenberg, writer Maxine Hong Kingston, architects Billie Tsien and Tod Williams, and visual artist James Turrell.

ZZ Top have been forced to postpone their upcoming US tour because bass player Dusty Hill has had to have surgery. The ZZ Top bass player is scheduled to undergo surgery to remove two kidney stones this week. As a result, the USA tour due to start in Morton, MN on July 25 will instead resume in Sturgis, SD on Ausgust 6. According to ZZ Top publicity, 'the kidney stones were discovered in the course of a routine physical examination […]