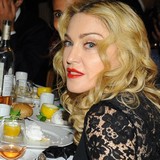 Madonna reportedly thinks her daughter Lourdes will be the next big star. The pop icon has her 17-year-old daughter with her ex-partner Carlos Leon. Lourdes has been attending the prestigious LaGuardia High School of Music & Art and Performing Arts in New York City and has now graduated, with her mom apparently sure she has what it takes to follow in her footsteps.
“Madonna has always been an incredibly strict mother at home, but now Lourdes has finished high school Madonna’s already plotting for her to follow in her footsteps and become a pop star,” an insider told Best magazine.
Lourdes has already dipped her toe into the showbiz pond having created a clothing line with her mom called Material Girl. She’s also been on tour with Madonna in the past, with the singer showing her the ropes even more as she’s got older.
“She has been learning from the best, and since she graduated has been accompanying Madonna to the studio and taking everything in,” the source said. “At one point Madonna was even thinking of retiring and letting her daughter take over. But she decided Lourdes has to prove herself, to see if she really has got what it takes to compete in the pop world.”
Last year, Lourdes blogged about her experiences on tour with her mother. She worked with Madonna during her MDNA series of shows, helping in the wardrobe department after realizing that she wanted a summer job just like her friends.
“Being in the wardrobe department meant me and a few other girls dressed the dancers during the show when they had quick changes,” she said. “Thirty seconds to totally dress a sweaty dancer can be insane and provoke mucho anxiety. Doing this night after night was pretty cray, but I loved every minute of it (sic).”

Linda Ronstadt has been selected to receive the National Medal of Arts next Monday at the White House. The National Medal of Arts is the highest award in the U.S. given to artists and arts patrons by the federal government. Next Monday's ceremony will be hosted by President Obama with Michele Obama in attendance and will be streamed live at 3 PM via WH.gov/Live. Ronstadt was selected 'for her one-of-a-kind voice and her decades of remarkable music. Drawing from a […]