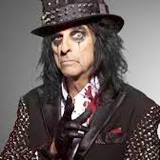 “Lost 45” guest Alice Cooper says playing the pantomime villain is one of the golden rules he lives his life by. The legendary rock singer, born Vincent Damon Furnier, created his stage image so that the music scene could have a dark lord. Since he burst onto the scene in the late ’60s with his band, Alice is one of the most instantly recognisable faces in the business – largely down to his stage make-up of heavily rimmed black eyes and long black hair.
“Be the pantomime villain,” he told Q magazine of the first of his ten golden life rules. “Any band, any movie, has to have a protagonist and an antagonist. When I started in rock’n’roll we didn’t gave a dark lord. Jim Morrison [lead singer of The Doors] was the closest thing we had to one, so I created a character with the make-up and shocking jokes. Some people didn’t get it.”
Alice has frequently performed with snakes and was even rumoured to have eaten a live chicken on stage in 1969.
While he doesn’t keep up the persona all the time, the performer concedes that it’s important to give the audience what they want.
“Kill the audience. If you don’t have the desire to take the audience and grab them by the throat, when you’re done they’ll say, ‘Oh, isn’t it nice how he that ballad’. No! Alice doesn’t say ‘thank you’. If he did, suddenly he’s human, Alice is inhuman,” he laughed.
Other rules include lose weight by eating something you don’t like and find your off button. Alice, 66, also advises that being a bad loser is not an attractive trait.
“Don’t be a bad loser. I like to wear black when I play golf, because I want to bring a bit of Alice to the game, but I’m a gracious loser. If I lose, I look at where I went wrong and figure out how to win. I know some people who wouldn’t even give you a two-inch putt. Golf is a game – that’s all it is – but it’s a game that you can never master and I play six times a week,” he smiled.

Robert Redford is the recipient of the Walden Woods Project's 2014 Global Environmental Leadership Award in recognition of his enduring commitment to a range of environmental initiatives. WWP founder Don Henley will present the award during a fundraising event on Tuesday, September 16 at the Citi Performing Arts Center/Wang Theatre in Boston, Massachusetts, featuring an intimate concert by the Eagles. Doors open at 7:30 p.m.; Program begins at 8 p.m.; Eagles concert at 9 p.m. Proceeds from the event will […]