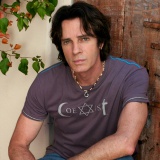 Rick Springfield has cancelled his upcoming Australian tour to make a movie with Meryl Streep. Springfield was due to start his first ever Australian tour in Perth on October 7 but will stay in the USA to work on Jonathan Demme’s new movie “Ricki and the Flash.”
Rick Springfield hinted at his involvement in the movie a month ago when he posted a pic of himself, Streep and Demme on Twitter but quickly removed the image. That image is back on his Twitter today.
Ricki and the Flash is about an aging rockstar (Streep) who tries to connect with her kids. The movie also stars Kevin Kline and Steep’s real-life daughter Mamie Gummer.
Demme has made the concert and documentary movies Heart of Gold, Neil Young’s Trunk Show and Neil Young Journey’s with Neil Young. He also directed Philadelphia, Married To The Mob and Silence of the Lambs. Ricki and the Flash will premiere on June 26, 2015.

Everyone knows the vocalists and most know the guitarists from their favorite groups but, with only a few exceptions, they would be hard pressed to tell you the bass player. MusicRadar decided to find out just who their readers thought were the greatest of the bass players that they DID know in a new poll. The site first asked readers to name their candidates for the sixty greatest bass players of all time. All of the suggestions were cut down […]