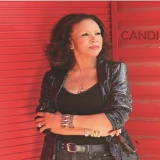 The First Lady of Southern Soul, “Lost 45” guest Candi Staton, who cut sixteen Billboard R&B chart hits in the early 1970s, will finally release her 27th album ‘Life Happens’ in the UK on October 27th.
It’s Candi’s third Americana/Roots oriented project since garnering unexpected attention in the genre with her 2006 acclaimed CD ‘His Hands’. The new collection pairs Staton with FAME Records producer Rick Hall (who produced her early `70s southern soul hits such as ‘Stand By Your Man’ and ‘He Called Me Baby’) for the first time since 1974. ‘Being in the studio with Rick was like old times’ says Staton who Hall recently inducted into the Alabama Music Hall of Fame.
With recent performances on Letterman and an upcoming UK tour, Staton shows no signs of letting up. Of course fans will be excited to hear some of Candi’s more famous numbers such as ‘Young Hearts Run Free’ and ‘Victim’ but the tracks such as ‘Where I’m At’ and ‘Beware’ will have people dancing in no time.
The 15-track record opens with Hall’s funk-fueled country rocker ‘I Ain’t Easy to Love’ that finds Staton performing with Jason Isbell (who scored a 2011 hit with his update of Staton’s obscure 1969 ditty ‘Heart on a String’) and John Paul White of The Civil Wars. ‘They were so much fun to work with’ Staton adds. ‘I really love what they added to the song and they sing with a soulfulness beyond their ages.’
The concept album tells the story of a romance from its beautiful beginning to its bitter end. Hall produced the upbeat plea for ‘Commitment’ and the heartbreaking ‘Never Even Had A Chance.’ Staton’s London-based band PUSH produced the smoldering ‘Close to You’ and the brassy ‘Where I’m At’. Staton’s son Marcus Williams, a drummer who’s toured with Peabo Bryson and Isaac Hayes, produced the remainder of the soul-stirring album.
The project comes on the heels of a revival of Staton’s music among a new generation of artists such as Isbell. Florence & The Machine enjoyed a Top Ten platinum smash with their cover of Staton’s ‘You Got the Love’. Other acts have sampled her sounds such as Christina Aguilera (‘Here to Stay’) and One Eskimo (‘Kandi’ which hit #1 on Triple A chart in 2010).
Staton wrote and co-wrote nine of the tracks and they all mirror her own romantic ups and downs over the years. ‘I’ve had good times and bad times in my relationships’ she says. ‘I’ve been cheated on, lied to and everything you can name but that’s life. That’s why I named the CD Life Happens because you don’t plan for these things. They just happen.’

Rick Springfield has cancelled his upcoming Australian tour to make a movie with Meryl Streep. Springfield was due to start his first ever Australian tour in Perth on October 7 but will stay in the USA to work on Jonathan Demme's new movie "Ricki and the Flash." Rick Springfield hinted at his involvement in the movie a month ago when he posted a pic of himself, Streep and Demme on Twitter but quickly removed the image. That image is back […]