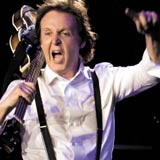 Paul McCartney’s latest album, “New,” will receive a special Collector’s Edition release on October 28 via Hear Music.
“New” expands to two-CDs and a DVD with unreleased tracks, live performances, music videos and documentaries. The second CD includes two tracks, Hell to Pay and Demons Dance, which were previously unreleased along with Struggle which was only put out in Japan. Those are followed by live versions of four of the songs from the album from shows at Japan’s Tokyo Dome.
The DVD has the documentary, “Something New,” interviews, performances from the promo tour, four music videos and three ‘making of’ shorts.

Aretha Franklin has a new album on the way and we may hear with within two week. According to Roger Friedman, the final mixes are still being put in place but everything is recorded, the album art is done and the set has a tentative title, "Aretha Franklin Sings the Songs of the Great Divas." Included in the set are covers of songs by Adele (Rolling in the Deep, the first single), Gladys Knight and the Pips (Midnight Train to […]