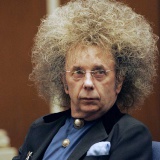 The Mirror has posted a new story reporting that legendary producer and writer Phil Spector is now housed at the California Health Care Facility in Stockton, CA where he and other prisoners within the California penal system, are sent when they are battling serious illness.
According to the tabloid, Spector is wasting away in prison and totally lost the use of his voice nine months ago. He was transferred to the hospital last October and two photos of him from that time recently were printed on-line (see our previous story and above right) that showed him aged and thin.
Spector’s lawyer, Chuck Sevilla, told the Mirror “He’s very frail. I believe he is able to walk, he’s lost a lot of weight, he’s been unable to speak for nine months due to polyps in his throat which they keep telling him they’re going perform surgery on, which they have not done. That’s just one of his many maladies. He’s in his 70s and he was not in the best condition going in.”
Spector was sentenced in 2009 to 19 years to life for the killing of actress Lana Clarkson.

For years, Rod Stewart has spent part of his concerts kicking soccer balls into the crowd. Rod loves soccer and fans love getting a souvenir from the show. Except for Mostafa Kashe. The only souvenir he received was a broken nose. Kashe attended an October 2012 show by Stewart at Las Vegas' Caesars Palace, part of his residency at the venue. He now alleges that he has had lingering problems from the broken nose he suffered from one of Stewart's […]