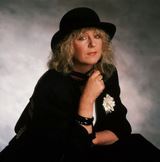 In an interview with Billboard, Annie Lennox opens up about reinventing herself, being more than a musician, and her thoughts on celebrity culture, telling the Billboard that it "makes [her] cringe." ​"​This celebrity culture is so diminishing, so invasive and reductive and embarrassing," says Lennox.​ ​"​It makes me cringe. But we're used to it, aren't we? We think it's normal.​"​ ​Lennox also maintains that she is more than a musician, and has recently been focusing on being a human rights […]