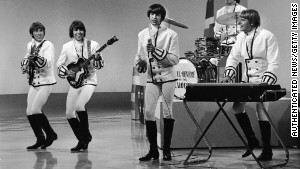 Paul Revere, leader of the 1960s rock band Paul Revere and the Raiders, died Saturday at his home in Idaho, the band’s website reported. He was 76.
Revere — whose birth name was Paul Revere Dick, according to a biography on the Internet Movie Database — was frontman for the band that often performed in three-cornered hats and other clothing harking back to the American Revolution.
Revere was born in Nebraska and played in bands in Idaho and Oregon, according to a tribute on the band website written by Roger Hart, who managed the group in the early days. Hart said he took the band to Hollywood and signed them to a deal with CBS/Columbia Records.
The band recorded a string of hits in the 1960s and early 1970s, including “Kicks,” “Hungry” and “Indian Reservation.” Revere, the band’s organist, had a hyperactive effervescent stage personality and came to be known as “the madman of rock ‘n’ roll.”
The band’s fame grew as the Raiders appeared on “Dick Clark’s American Bandstand,” “Where the Action Is,” the “Ed Sullivan Show,” the “Tonight Show with Johnny Carson” and even the “Batman” television show.
Revere recognized his debt to Clark. In a CNN.com story, Revere wrote about seeing his mentor six weeks before Clark’s death in 2012. “I gave him a hug and told him everything I have and everything I am I owe to him,” Revere wrote.
The band became a fixture on the oldies circuit in later years and had a tour scheduled to start in November. Revere’s cause of death was not disclosed, but Hart said Revere died “peacefully.” Besides Revere, the original Raiders included Mark Lindsay, Phil Volk, Drake Levin and Mike Smith, the website said. Levin and Smith have died.

Christine McVie has permanently rejoined Fleetwood Mac back on the road and a whole lot of her songs and now back in the set. Christine McVie rejoined the band for the first time since November 30, 1997 at the end of the tour in support of "The Dance." She had returned to England to be near to her family and had not participated in any musical activity, except for the recording of a solo album in 2004, since that time. […]