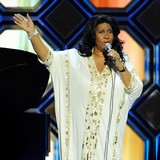 Aretha Franklin thinks it’s ‘ridiculous’ she hasn’t collaborated with Stevie Wonder and Smokey Robinson. The legendary singer is giving fans a treat with her new album Aretha Franklin Sings the Great Diva Classics, a compilation of covers. She’s had many special moments in her life, but there are still a few things the 72-year-old hopes to achieve.
‘The presidential inauguration for Mr. Clinton and Mr. Obama and President Carter. And the Grammy moment of course, a wonderful moment. I’ve sung at the Oscars maybe four times.’ she recalled to TV show Good Morning Britain when asked about her stand-out moments.
‘I’d love to do something with Stevie [Wonder], I’d love to do something with Smokey [Robinson], and it’s ridiculous after all these years that we have not done something together.’
As part of her new album, Aretha covers British singer Adele’s track “Rolling in the Deep.” The 26-year-old is known for her soulful voice and Aretha revealed what attracted her to the song. ‘I’d seen one of her promotional pieces. I love that song, I love that hook,’ she gushed.
Other classics on the record include a mash-up of Chaka Khan’s “I’m Every Woman” and Aretha’s “Respect,” Alicia Keys’ “No One” and “Midnight Train to Georgia,” originally by Gladys Knight & the Pips. While the musician is proud of her work, she knows fans will make the call on how popular the album is.
‘People make the final decision. You can love it in the studio but the people make the final decision. You never know whether they will like it or not,’ she reasoned.

Billy Joel continues to be a composer. He's just not concerned about anyone else ever hearing the music. In a terrific profile from the New Yorker, Joel has revealed that he has been working on an instrumental song cycle for over ten years but all of the pieces are just in his head. Not one note has been committed to paper. This is Joel in his later years, playing a monthly residency at Madison Square Garden along with occasional shows […]