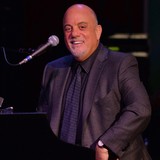 Billy Joel continues to be a composer. He’s just not concerned about anyone else ever hearing the music. In a terrific profile from the New Yorker, Joel has revealed that he has been working on an instrumental song cycle for over ten years but all of the pieces are just in his head. Not one note has been committed to paper.
This is Joel in his later years, playing a monthly residency at Madison Square Garden along with occasional shows in other venues, living in an admittedly lavish style and composing music, when the muse hits, for no one but himself. ‘It’s all here’, Joel said, pointing to his head.
Billy went on to say he didn’t know, or care, where these compositions would go. ‘Some could be songs, some could be ideas for a soundtrack or something, some are more like hymns.’ Even so, he admits that the music has an overarching theme, telling the history of Long Island.
Joel hasn’t recorded a new album of pop/rock music in 31 years and it certainly doesn’t sound like these new songs are headed in that direction. saying: “Then it’d need words, and I don’t wanna.”
Still, Joel realizes that time may not be kind to the long-term preservation of his new music. He admitted that he is having trouble remembering a few of the passages and agrees to, at the least, get the pieces on tape sometime in the near future. Maybe, in fifty years, those tapes will appear on some grandiose box set of Joel’s lifetime work.
In the meantime, it seems that Joel has found a place in life where he is happy, indulging his inner rock star during occassional shows and spending the rest of his time living a life of leisure, even if he does sometimes feel guilty about it.

Culture Club took to the stage in Heaven the scene of their inaugural London show in 1982 last night to play their first gig in twelve years. The eleven-piece band, including original line-up with Boy George on vocals, Mikey Craig on bass, Roy Hay on guitar/keyboards and Jon Moss on drums/percussion, performed songs from their new album Tribes as well as the old classics. The celebratory 'practice' gig lasted an hour and a half with fans leaving the venue ecstatic. […]