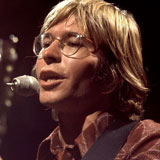 John Denver received the 2,531st star on the Hollywood Walk of Fame on Friday, 17 years after he was killed in a plane crash.
On hand for the ceremony were his son, Zak Deutschendorf, and daughter, Jesse Belle Denver. Songwriter Joe Henry spoke on Denver’s behalf. Trampled by Turtles performed Annie’s Song. Denver’s daughter accepted.
According to the site Seeing-Stars.com, Denver was actually awarded the star in 1982 but the singer was never able to work the ceremony into his schedule. He died fifteen years later, still not enshrined, and it took seventeen more years before the star was actually installed.
A retrospective of Denver’s photographs, “Sweet Sweet Life: The Photographic Works of John Denver,” is currently being held at Hollywood’s Substrate Gallery.

Clive Davis thinks the music industry has suffered tremendously since Whitney Houston's death. The beloved singer passed away in February 2012 at the age of 48, and legendary music mogul Clive is currently promoting her new posthumous album, entitled "Whitney Houston Live: Her Greatest Performances." Clive has been involved in the music scene for five decades and the 82-year-old is convinced listeners have been missing out on a distinct kind of performance since the "I Will Always Love You" Singer's […]