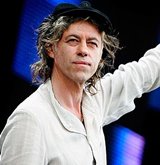 Bob Geldof and Midge Ure are believed to be working on a 30th anniversary version of the classic Christmas pop song ‘Do They Know Its Christmas’.
The original ‘Do They Know Its Christmas?’, released in 1984 to raise funds to fight the famine in Ethiopia, featured dozens of the biggest stars of the day including George Michael, Phil Collins, U2, Bananarama, Duran Duran, Spandau Ballet, The Style Council and Culture Club.
The track was updated five years later with Cliff Richard, Kylie Minogue, Jason Donovan, Bros and Big Fun.
In 2004 a 20th anniversary version was produced featuring Paul McCartney, Chris Martin of Coldplay, Justin Hawkins of The Darkness and Geldof and Ure.
Geldof is said to be recruiting interested pop stars for the fourth edition of his Christmas classic, reports Hollywood.com.
Geldof’s beneficiary for the 30th anniversary project is expected to be Ebola research.

Queen has released the song "Let Me In Your Heart Again," with vocals from the late Freddie Mercury, as part of Coca Cola and (RED)'s campaign to help combat AIDS. The song has been remixed by William Orbit for this release using Mercury's original vocals. Other artists that have lent their music to the "Share the Sound of an AIDS-Free Generation" include Aloe Blacc (Together is out November 10), Wyclef Jean Featuring Avicii (Divine Sorrow, November 17) and OneRepublic (I […]