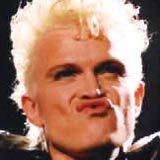 Billy Idol is glad there was no social media about when he dominated the charts. The British punk rocker was one of the biggest names in music during the 80s and had worldwide success with songs such as “White Wedding” and “Dancing with Myself.” Along with his showbiz lifestyle came plenty of drink, drugs and women – even though he had long term girlfriend Perri Lister.
“She didn’t really know about [the women]. Thank God there wasn’t social media like there is now; it’s ruined everything. You can’t even buy crack on a side street without the papers knowing. Hopeless,” Billy sighed to Q magazine.
Billy went on to battle drugs, with crack being his narcotic of choice. After a serious motorbike accident in 1990 he sunk further into addiction and collapsed four years later from an overdose.
However the 58-year-old hasn’t touched crack for over a decade, kicking the habit in 2003. “I had a great time, but it would be so wrong for me now. You wouldn’t want to meet me if I’d stayed like that. You lose your teeth and everything,” he said.
In recent years Billy has become a regular on the festival scene and released his seventh studio album Kings & Queens of the Underground last month. He also penned his own autobiography Dancing with Myself which came out in October too.
“When I was young there were no old stars. It was a footballer’s lifespan and then playing working-men’s clubs up North [in Britain]. Or in cabaret. So I’m just glad there’s still enough people who like my music.
“[Being level headed] I think that’s to do with coming out of the punks scene. It keeps you grounded because it was all about smashing the star system. I’m not some damaged article. I’m still vibrant. I’ve had a great life,” he smiled.

In August of 2013, Linda Ronstadt revealed to the world that she was suffering from Parkinson's Disease, a debilitating illness that robs its victims of muscle movement and control. At that time, she said that she no longer can sing and, in a new interview with CBS, has elaborated, saying "It wouldn't sound like anything. I can't get to the note. I can't make any quality sound. I can't arrange pitch. I might aim for a note and hit another […]