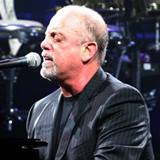 Billy Joel will set a new record for most performances at Madison Square Garden this summer. The 65-year-old musician, who kicked off a residency at MSG earlier this year, will play his 65th show at the New York City arena July 1, 2015. It will be a landmark show, and the most any artist has played at the famous venue, PageSix reports. Sir Elton John currently holds the record.
Tickets for Billy’s summer shows, including dates in May, June and July, will be up for grabs for the general public beginning this Saturday. The Piano Man made the announcement of his residency in December 2013, revealing he would be playing MSG once a month indefinitely, Rolling Stone reports.
“Playing Madison Square Garden is an experience that never gets old,” he said at the time.
“A show a month at the Garden for as long as there’s demand means more opportunities to connect with music fans and provides a unique and memorable show every time we play here.”
The first show in the line-up was January 27, The ongoing gig is also a first of its kind for MSG, whose executive chairman James Dolan applauded Billy’s talents upon confirming the news.
“Billy, having you as our music franchise feels a little like having the Pope as your parish priest. I’m truly an admirer and I grew up with your music, too, and so I’m thrilled to death,’ he said.

Billy Idol is glad there was no social media about when he dominated the charts. The British punk rocker was one of the biggest names in music during the 80s and had worldwide success with songs such as "White Wedding" and "Dancing with Myself." Along with his showbiz lifestyle came plenty of drink, drugs and women - even though he had long term girlfriend Perri Lister. "She didn't really know about [the women]. Thank God there wasn't social media like […]