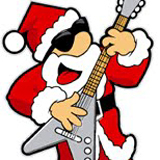 'Santa Claus Is Coming To Town' is the number one Christmas song of the past 100 years. Every year, ASCAP publishes their list of the most performed holiday songs for the last year; however, being that it is the rights organization's 100th anniversary, they've upped the ante and released their list of the most performed over the past century.
As we have said in the past, keep in mind that these are the most performed songs that were licensed through ASCAP and do not include songs from composers affiliated with other organizations unless it is one affiliated with ASCAP (Britain's PRS) or where two or more songwriters were from different groups. As can be seen from this list, though, ASCAP seems to have the market for most of the greats of the genre.
At the top is the 1934 composition Santa Clause is Coming to Town, originally written by Fred Coots and Haven Gillespie for Eddie Cantor who needed a song to sing during the Macy's Thanksgiving Parade broadcast of that year. It was also recorded by banjoist Harry Reser and Tommy Dorsey and his Orchestra but it wasn't until Perry Como recorded it in the early 50's that it finally hit the charts. The song has never been a major chart hit but has been recorded by a long list of artists from the Four Seasons (1963 / #23) to Bruce Springsteen & the E Street Band to Miley Cyrus.
At number 2 is Mel Torme and Robert Wells' The Christmas Song (Chestnuts Roasting on an Open Fire). Written in 1944, it was first recorded by the Nat King Cole Trio in 1946 with Cole rerecording the song later in the year with a small string section, 1953 with a full orchestra and 1961, again with a full orchestra but in stereo. It has also been covered by hundreds of other artists.
In third is Irving Berlin's 1941 classic White Christmas. Bing Crosby first performed the song on the Christmas 1941 day edition of the Kraft Music Hall and released in on the 78-rpm set of music from the film Holiday Inn. Crosby didn't think the song was anything special, but it's popularity took off for Christmas 1942 where it topped the Billboard charts for eleven weeks. It is considered the biggest selling single of all-time around the world with an estimated 50 million copies.
ASCAP's Top 30 Performed Holiday Songs 1914 ' 2014:
1. Santa Claus Is Coming to Town (1934 ' Written by Fred Coots and Haven Gillespie)
2. The Christmas Song (Chestnuts Roasting on an Open Fire) (1944 ' Written by Mel Tormé and Robert Wells)
3. White Christmas (1941 ' Written by Irving Berlin)
4. Winter Wonderland (1934 ' Written by Felix Bernard and Richard B. Smith)
5. Have Yourself a Merry Little Christmas (1944 ' Written by Ralph Blane and Hugh Martin)
6. Sleigh Ride (1948 ' Written by Leroy Anderson and Mitchell Parish)
7. Jingle Bell Rock (1958 ' Written by Joseph Carleton Beal and James Ross Boothe)
8. Rudolph the Red-Nosed Reindeer (1949 ' Written by Johnny Marks)
9. Let It Snow! Let It Snow! Let It Snow! (1945 ' Written by Sammy Cahn and Jule Styne)
10. I'll Be Home for Christmas (1943 ' Written by Kim Gannon and Walter Kent)
11. Little Drummer Boy (1941 ' Written by Katherine Davis, Henry Onorati and Harry Simeone)
12. Silver Bells (1950 ' Written by Ray Evans and Jay Livingston)
13. Rockin' Around the Christmas Tree (1958 ' Written by Johnny Marks)
14. Frosty the Snowman (1950 ' Written by Steve Nelson and Walter E. Rollins)
15. Blue Christmas (1964 ' Written by Billy Hayes and Jay Johnson)
16. It's the Most Wonderful Time of the Year (1963 ' Written by Edward Pola and George Wyle)
17. It's Beginning to Look a Lot Like Christmas (1951 ' Written by Meredith Willson)
18. Here Comes Santa Claus (Right Down Santa Claus Lane) (1947 ' Written by Gene Autry and Oakley Haldeman)
19. Do You Hear What I Hear? (1962 ' Written by Gloria Shayne Baker (SACEM) and Noël Regney (SACEM))
20. Carol of the Bells (1904 ' Written by Mykola Leontovych and Peter Wilhousky)
21. Feliz Navidad (1970 ' Written by Jose Feliciano)
22. Have a Holly Jolly Christmas (1965 ' Written by Johnny Marks)
23. I Saw Mommy Kissing Santa Claus (1952 ' Written by Tommy Connor (PRS))
24. Last Christmas (1984 ' Written by George Michael)
25. Home for the Holidays (1954 ' Written by Robert Allen and Al Stillman)
26. Wonderful Christmastime (1979 ' Written by Paul McCartney (PRS))
27. Happy Holidays (from Holiday Inn) (1942 ' Written by Irving Berlin)
28. All I Want for Christmas Is You (1994 ' Written by Walter Afanasieff and Mariah Carey (BMI))
29. Santa Baby (1953 ' Joan Javits, Philip Springer and Tony Springer (SOCAN))
30. This Christmas (1970 ' Written by Donny Hathaway and Nadine McKinnor)

MADONNA has been ranked as the wealthiest recording artist with a net worth of $800 million by WEALTH-X. At 56 years old, MADONNA has had an illustrious career in the music industry over the past three decades, selling over 300 million records worldwide and inking a series of lucrative contract deals, including a $120 million contract with LIVE NATION in 2007. The "Queen of Pop" has also ventured into other industries such as filmmaking, fashion and children's books. In second […]