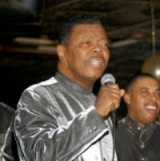 Edward ‘Sonny’ Bivins, a founding member and the baritone for the Manhattans, died at his home on Wednesday morning at the age of 78. Bivins was born in 1936 in Macon, GA but grew up in New Jersey. He originally wanted to be a baseball player, even making it to the minors with the Jersey City All-Stars but his love of music and entertainment soon won out. After he was discharged from the military, Sonny and two high school friends, Winfred ‘Blue’ Lovett and Kenny ‘Wally’ Kelley, along with two acquaintances from another local school, Richard ‘Ricky’ Taylor and George ‘Smitty’ Smith, came together to form the Manhattans.
The group was discovered at an Apollo talent night in 1964 by Joe Evens who owned Carnival Records. He signed the group and released their first single “For the Very First Time” later in the year.
The next year, they had their first national hit with “I Wanna Be (Your Everything)” (1965 / #65 Pop / #12 R&B) and followed with “Searchin’ For My Baby” (1965 / #20 R&B) and the Bivins written “Follow Your Heart” (1965 / #92 Pop / #20 R&B).
Three more top thirty R&B hits and a top twenty R&B album in 1966 further cemented the Manhattan’s reputation. In late 1970, George Smith fell down a flight of stairs and his injuries forced him to leave the group. He was replaced by Gerald Alston, brother of the Shirelles’ Shirley Alston-Reeves, who sang lead on most of the groups records throughout the decade.
After a short stint on DeLuxe, the Manhattans were signed to Columbia where they finally broke into the R&B top ten with “One Life to Live” (1972 / #3 R&B), the Bivins written “There’s No Me Without You” (1973 / #43 Pop / #3 R&B), “Don’t Take Your Love” (1974 / #37 Pop / #7 R&B) and “Hurt” (1975 / #97 Pop / #10 R&B).
In 1976, the Manhattans recorded a song written by Winfred Lovett called “Kiss and Say Goodbye” which would make them cross-genre stars. The song hit number 1 on the R&B chart and crossed over to the top of the Billboard Hot 100. The returned to similar heights four years later with “Shining Star” (1980 / #5 Pop / #4 R&B).
Alston left the group in 1988 and they moved from Columbia to Valley Vue Records but the hits had dried up. Bivins kept the group, in various forms, together over the years and, today, there are two touring versions, one that included Bivins and another that included founding member Blue Lovett and a returned Gerald Alston.
The Bivins version recorded the album The Manhattans Now in 1994 and released a single in 2013, “Just For Tonite.” There were plans to release a new CD in the new year.
Bivins was inducted into the Rhythm and Blues Hall of Fame and received the R&B Pioneer Award in 2000 along with fellow members Kenneth Kelley and Winfred Lovett.