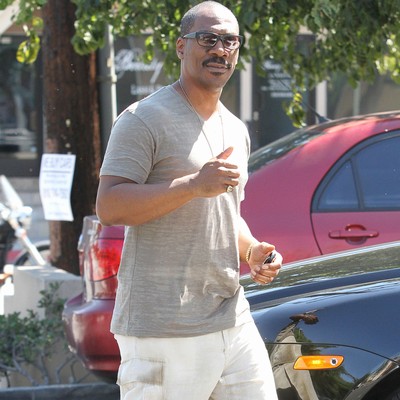 Eddie Murphy isn’t trying to get more famous by releasing new music. The 53-year-old star is best known for his renowned film career, with movies featuring him grossing $6.6 billion worldwide as of last year. But he has other talents under his belt and is also a singer, releasing hit singles “Party All the Time” and “Put Your Mouth on Me” in the mid-80s.
After 20 years away from the music industry, Eddie unveiled reggae track “Red Light” in 2013 and later this month he’s putting out single set “Oh Jah Jah” for iTunes.
Many will be surprised by his return to music, but Eddie insists the creativity has remained with him all this time.
“That’s a misconception. I stopped putting music out 20 years ago. I’ve never stopped making music. I’ve always had a facility for recording at the house. I’ve stayed in the studio for years and years,” he explained to Rolling Stone. “Twenty years ago there was a bunch of motherf**kers just putting records out that was actors. I didn’t want to be one of these motherf**kers dropping tracks on some ego sh*t, trying to be the actor-singer. It always looks weird when you see the actor singing in the video. You’re always gonna be like, ‘What the f**k is this?’ I didn’t want to be part of it. I’m not trying to get no paper, or get more famous off of this. I just do it, and I love doing it.”
He’d love to release another album, having recorded several previously, but that all depends on how people respond to Oh Jah Jah. Eddie isn’t fazed about his music not making the big time though and always looks to improve his abilities.
“I’m cool with all my sh*t being on the shelf until 100 years from now. Everything comes out 100 years from now. Any artist that did anything, once you’re gone, they go looking through all your sh*t,” he quipped. “Like this scrap of paper that you drew on. If I’m doing a movie or if I’m going onstage, that’s me being funny. But music, I do that all the time, for free. And if you do something for years and years and years and years, eventually you gonna get a little better at it. I got some stuff now.”

After 38 years as a member of the B-52's, Kate Pierson is temporarily striking out on her own with her first solo album, 'Guitars and Microphones'. Her first single from the album, Mister Sister, is being followed up by Bring Your Arms, a song written by Sia and Chris Braide after Pierson and Sia saw the rescue of a sea turtle. 'Guitars and Microphones' will be out on February 17 via Lazy Meadow/Kobald. The album was produced by Tim Anderson […]