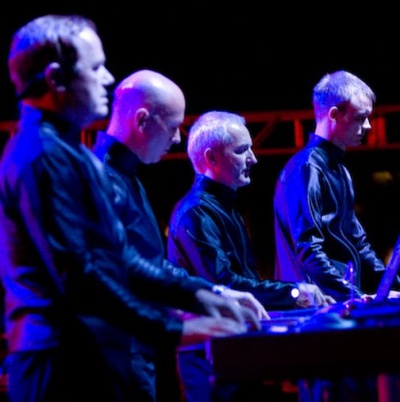 Kraftwerk have taken legal action against a tech form using its band name. The band is famous for monster international hits such as “Autobahn” and “Trans Europe Express.” You’re on the road and need to use your phone, tablet or camera but it’s out of power. No problem. Just pull out your kraftwerk fuel cell and you are good to go.
Well, maybe not quite yet, at least if Ralf Hutter of the German electronica pioneers Kraftwerk has anything to say about it. Hutter has filed a lawsuit for trademark infringement against eZelleron, Inc., the company who has financed the production of the new product through KickStarter to the tune of $1.5 million.

The question is whether the group’s trademark actually extends to cover the kraftwerk name in the power/fuel cell market. Initial thoughts are that it doesn’t except for one small hitch, ‘kraftwerk’ translates from German to English as ‘power station’.

The suit states ‘Defendant is taking advance orders for the KRAFTWERK charging device, therefore, consumers are likely to assume that there is a connection, association, or relationship between the famous electronic Music band and a charger for portable musical-playing devices.’

Stevie Wonder has commented on the 'Blurred Lines' vs 'Got To Give It Up' court case. The music legend says the court made the wrong decision. 'I don't think it's a steal from Marvin Gaye,' Wonder told TMZ. 'I've been through lawsuits for songs and all that. I think that the groove is very similar but you have to remember he is a big fan of Marvin Gaye's so that's okay. But the song is not like Marvin Gaye's. It […]