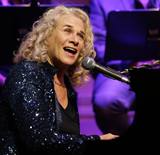 Sony Pictures has obtained the rights to the movie version of the Broadway show Beautiful: The Carole King Musical and with Tom Hanks, Gary Goetzman and Paul Blake to produce. Blake was the original producer of the theatrical version.
Barry Mann and Cynthia Weil first broke the news on Twitter last Thursday, saying ‘Exciting news. Film version of #Beautiful will be made at Sony, produced by @TomHanks, Gary Goetzman & Paul Blake. As DGD used 2 say WOWA!’ That message has been removed as, through their own admission, they ‘jumped the gun’ on the announcement.
No decisions have been made yet on casting. Jessie Mueller won the Tony award for portraying King and continues in the role; however, Broadway stars rarely make the transition to the big screen versions of shows. Nevertheless, Mueller is strikingly similar in looks to the young King and is excellent at performing the songs.
Michael DeLuca of Sony said ‘Audiences both on Broadway and in the West End have responded to ‘Beautiful’ not only to relive Carole King’s timeless classics, but to experience the ways they illustrate her triumphant and joyful life story.’
The film will be adapted by the original Broadway writer, Douglas McGrath. Entertainment Weekly also reports that Sherry Kondor and Christine Russell will also be part of the production team.

Free bass player Andy Fraser has lost his battle with cancer at age 62. Fraser formed Free with Paul Rodgers in 1968 when he was 15 years old, In 1970 they delivered the classic hit 'All Right Now', written by Fraser. Free released six studio albums and one live album between 1969 and 1973 but the cracks started to show around 1971 with the breakdown of the relationship between Rodgers and Kossoff. Kossoff left the band mid-1972 and was replaced […]