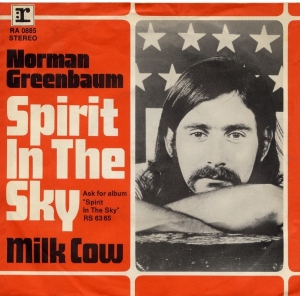 The singer-songwriter behind the 1969 rock hit “Spirit in the Sky” has been critically injured in a Northern California car accident that killed a motorcyclist. Officials in Santa Rosa reported Sunday that 72-year-old Norman Greenbaum wrote and sang the hit song featured in 50 movies and several TV shows. He is a favorite guest on “The Lost 45s” show.
Sgt. David Derczo of the California Highway Patrol tells the newspaper that Greenbaum, a longtime resident of Santa Rosa, was the passenger of a Subaru Outback on Saturday afternoon that turned left, crossing into the motorcycle’s path.
Derczo says the motorcycle’s 20-year-old driver, Ihab Usama Halaweh, died at the scene; his passenger was also critically injured.
The newspaper says Greenbaum and the motorcycle passenger are being treated at a hospital.
Officials say the car’s driver was not injured.

Duran Duran have signed an international recording contract with Warner Brothers Records. The group has just finished recording their new album in London, the 14th of their career and their first since 2011's All You Need is Now. Set for a September release, the album was produced by Nile Rodgers, Mark Ronson and Mr. Hudson. The first single, Pressure Off, features critically acclaimed singer / songwriter Janelle Monáe. Bassist John Taylor said of the new agreement 'We could not be […]