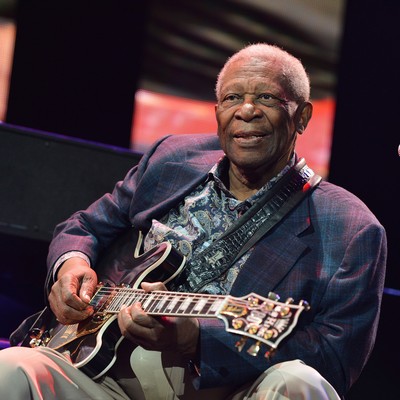 B.B. King has died. The music legend passed away at his home in Las Vegas yesterday, at the age of 89. Attorney Brent Bryson told The Associated Press that King died peacefully in his sleep. He also revealed the singer had been receiving hospice care.
King exploded on to the music scene in the 50s, and released debut album “Singin’ The Blues” in 1957 which spawned five charting singles. His biggest Top 40 hit was “The Thrill is Gone.”
He won his first Grammy Award in 1971, bagging Best Male R&B Vocal Performance. He went on to win another 14 of the prestigious music awards and was last honored at the ceremony in 2009 for Best Traditional Blues Album.
On top of that he was awarded the Lifetime Achievement Grammy in 1987, as well as a Grammy Hall of Fame Award in 1998.He was also inducted into both the Blues Foundation Hall of Fame and the Rock and Roll Hall of Fame. The blues star performed well into his 80s, but suffered with diabetes. His health had been in decline for the past year.
He was twice married and had fathered 15 biological and adopted children. Family members say 11 survive. Over his decades in music King had collaborated with everyone, from Eric Clapton to U2. Stars have taken to Twitter to pay their respects.
“God bless BB King peace and love to his family Ringo and Barbarax (sic),” Ringo Starr posted.
“Very sad. BB KING: Rest In Peace.. (sic),” tweeted Gene Simmons.
“Sad to hear B.B. King has left us. I loved collaborating with him, loved his music, & his spirit. He changed music forever. God bless him (sic),” Brad Paisley shared with fans.

Warner Music have announced the release of a very special 30th anniversary edition of Private Dancer, the breakthrough solo album of the world's most loved singers and performers, Tina Turner. Originally released in June 1984, Private Dancer features hits from the eight Grammy Award winning artist including 'What's Love Got to Do With It', 'Better Be Good To Me', 'Private Dancer' and 'Let's Stay Together'. Private Dancer ' 30th Anniversary Edition will be available on Monday 29 June. The classic […]