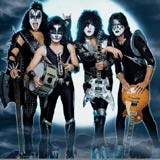 There seems to be a divide in the ranks of KISS over whether they should do a new album. Paul Stanley recently told Classic Rock magazine that he didn’t really think new music from KISS was really necessary. “I feel we can move forward without new music. There are enough things going on in Kiss that right now it doesn’t feel utterly necessary to make a new album”, although he didn’t totally rule it out. “Anything is possible but at the moment I don’t see it on the horizon. I’m not one to ever say ‘never.'”
That led to Gene Simmons countering Stanley at NU.nl (yes, you’ll have to run that link through a translator). “It will happen when we have time. I have music in me that needs to come out. I recently wrote a song called Your Wish Is My Command. It feels like a KISS song and it just needs to be released on a KISS album. … First we have to finish a whole slew of shows. That will take at least until the end of this year.”
He also doesn’t think the band is that busy in the long run, especially Stanley. “Paul doesn’t have so many other things in his life that demand attention, so he can concentrate fully on the project.”
After their album Psycho Circus (1998 / #3), it was eleven years before they unleashed Sonic Boom (2009 / #2) on their fans. Three years later, they released Monster (2012 / #3). The three albums were the highest charting of their career in the U.S. although they continue to seek their first number 1.

Louis Johnson, founding member of funk band the Brothers Johnson and an in-demand bassist who appeared on Michael Jackson's "Billie Jean" and "Don't Stop 'Til You Get Enough," died on Thursday, May 21st. He was 60. Johnson's nephew Troy confirmed his death to Rolling Stone, though a cause of death has yet to be revealed. "I've never been given parts to play in my whole life. I'm the most rare bass player in the whole world," Johnson told Rolling Stone […]