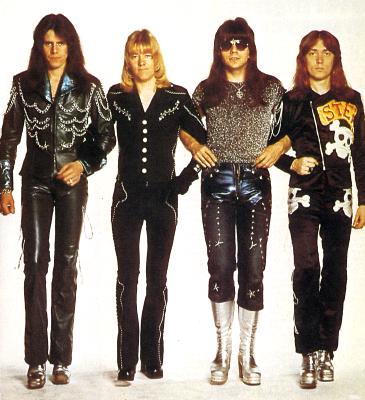 It was the era that had it all ‘ glitz, glamor and musical innovation. Providing a musical bridge linking the rebellion and counter culture of the 60s, and the decadence of the 80s, the 70s played a vital role in the shaping of modern pop culture.
Now for the final time, one of the decade defining glam rock bands, SWEET, will take to the road alongside MUD, as well as special guests THE RUBETTES featuring original members Alan Williams, John Richardson and Mick Clarke. The 24 UK tour starts 10th November.
As three of the greatest, most exuberant live bands of the 70s team up for Glitz, Blitz and 70’s Hitz, the artists will remind us why that decade was a truly innovative era in the history of pop music, ushering in a generational change with dazzling color and uplifting music.
During the 70s, SWEET rode a wave of smash hits; hits such as Blockbuster, Ballroom Blitz, Fox On The Run, Love Is Like Oxygen, Little Willy, Action were all fixtures of the decade. They were at the heart of a glam rock phenomenon, selling over 55 million records, and had 34 Number 1 hits worldwide.
The band today has an illustrious pedigree, recreating live the high energy and soaring vocals associated with the Sweet sound that is the band’s trademark. Led by original member Andy Scott, the band comprises Pete Lincoln (lead vocals and bass guitar), Bruce Bisland (drums and vocals) and Tony O’Hara (guitar, keyboards and vocals).
Andy Scott commented, ‘For Sweet to be going back out on tour in the UK on such a big scale for what will probably be the last time is a real thrill. For us performing is at the very heart of what we do and though fashions change our songs have lasted through five decades. When we’re up on the stage in front of an audience it’s almost as if time has stood still’.
Also taking to the stage are MUD 2. Since the passing of lead vocalist Les Gray in 2004, MUD 2 have continued his musical legacy, keeping songs such as Tiger Feet, Lonely This Christmas and Oh Boy as vibrant and vital as they always were. In the mid 70s the band were nothing short of being a phenomenon, enjoying a staggering fourteen UK Top 20 hits between 1973 and 1976 including three number ones.
Special guests on the bill will be The Rubettes. Known to millions for their seminal 1974 hit Sugar Baby Love, the lineup for this tour will be led by Alan Williams alongside fellow original members John Richardson and Mick Clarke.
During the 70s, the band had 15 international hit singles including Tonight, Jukebox Jive, I Can Do It, Baby I Know and more. With over 30 million record sales, they are one of the most prolific bands of the era.

There seems to be a divide in the ranks of KISS over whether they should do a new album. Paul Stanley recently told Classic Rock magazine that he didn't really think new music from KISS was really necessary. "I feel we can move forward without new music. There are enough things going on in Kiss that right now it doesn't feel utterly necessary to make a new album", although he didn't totally rule it out. "Anything is possible but at […]