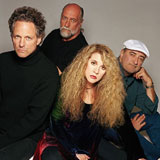 Fleetwood Mac have discussed whether they’ll be releasing a new album in the future. The iconic rock band, comprised of Mick Fleetwood, John McVie, Christine McVie, Lindsey Buckingham and Stevie Nicks, is currently performing concerts around the world on their On with the Show tour.
And although Mick tells UK newspaper The Mirror he’d like to see the group cut another record because they have ‘a sh*tload of new songs’, his bandmember Stevie isn’t so sure.
‘Honestly, I just don’t know about it. This tour has been so hard and so breathtakingly overwhelming,’ Stevie said. ‘I have to look great, I have to feel great, I have to sound great. And I cannot be thinking about future albums or poetry or songs right now. Now we have Europe to conquer. It’s really important that we are spectacular. And that’s all that I can worry about right now.’
Mick turns 68 years old on June 24 and he’s loving his golden years. But the star confesses his body sometimes struggles to keep up the pace.
‘I’m like an old race horse. It’s not like I’m ancient ancient, but these things are sort of worn out a bit,’ Mick said while rubbing his shoulders, noting he now wears wristbands for tendonitis. ‘I’ve got a deep-freeze in my room in order to do what I’m doing… you take care of yourself. I’m not letting up any. I’m playing harder than I ever played, apparently.’
English musician Mick notes despite his old age he’s still a hit with the youth. The singer has become good friends with One Direction singer Harry Styles.
‘We’re penpals! I took my two 13-year-old daughters and their mates to see One Direction. And that point, the girls are going, ‘Dad, just don’t embarrass us! No dad-dancing!’,’ Mick recalled of when he first met Harry. ‘But had the meet-and-greet thing… and what happened in front of my daughters was Dad became a superstar!
‘They all wanted to meet me! My ante got upped! All their songwriting team wanted to meet me. That’s when I met Harry and he’s come to three of our shows. He writes to me from weird places.’

Diana Ross is 'loving' the Twitter experience. The private 71-year-old music icon, who rarely gives interviews, joined the micro-blogging social media network on Wednesday and so far the "I'm Coming Out" songstress loves the online community. 'I am on Twitter now and loving it,' her first tweet ever reads. The former The Supremes singer was quick to promote her family on the site. She gave a shout out to her son Evan Ross, who recently married Ashlee Simpson, in her […]