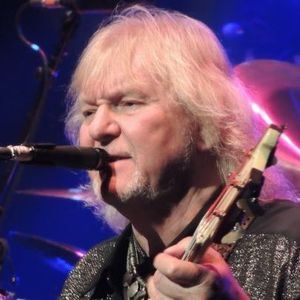 Chris Squire, the co-founder and bassist for the progressive rock legends Yes has passed away just over a month after it was revealed that he was suffering from a rare form of leukemia. Squire was 67. He was the only member of the group to perform on every studio album. Current Yes keyboardist Geoff Downes first tweeted the news, “Utterly devastated beyond words to have to report the sad news of the passing of my dear friend, bandmate and inspiration Chris Squire.”
Yes also confirmed his passing on their official Facebook page. “It’s with the heaviest of hearts and unbearable sadness that we must inform you of the passing of our dear friend and Yes co-founder, Chris Squire. Chris peacefully passed away last night in Phoenix Arizona, in the arms of his loving wife Scotty,” the band wrote in a statement.
Because of his phenomenal bass-playing abilities, Chris Squire influenced countless bassists around the world, including many of today’s well-known artists. He was also a great songwriter, having written and co-written much of Yes’ most popular songs, as well as his solo album, Fish Out of Water.”
In May, Squire revealed that he was recently diagnosed with acute erythroid leukemia, which would cause him to miss the band’s summer co-headlining tour with Toto. The absence marked the first time in the band’s history that Yes toured without their longtime bassist.

Joni Mitchell is 'still not speaking', according to her dear friend David Crosby. The 71-year-old legendary folk musician was rushed to hospital in Los Angeles on March 31, after being found unconscious at her home. And her friend David of the band Crosby, Stills & Nash has provided an update on her health. "To my knowledge, she is not speaking yet," the 73-year-old revealed during an interview with HuffPost Live. "She is home, she is in care, she is recovering." […]