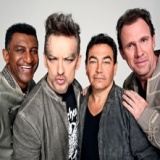 Boy George looks at the Culture Club reunion as part of his ‘recovery’. The 54-year-old musician is the lead singer of the hit band, who released legendary tunes like “Karma Chameleon” and “Do You Really Want to Hurt Me” in the 1980s.
Culture Club is kicking off a new tour on July 17 in Canada, 12 years since they last toured in North America, and Boy views their reunion as something special.
‘Three of the four of us are in recovery,’ George told the New York Daily News, with his guitarist bandmate Roy Hay noting, ‘This whole comeback is just one big amends.’ Boy admitted reuniting can pose somewhat of a challenge for him. But he’s able to look past momentary acrimony and find value in each of his bandmates.
‘We get on each other’s nerves,’ he noted. ‘It’s like going home for Christmas with your family. There’s always going to be something said that hurts you. But you know what? I love these fools.’
Boy has had a long history of drug abuse and a decade ago he was arrested in New York City for cocaine possession.
He is now sober and his drug-addled ways are long behind him.
‘That person and me, there’s no connection at all. [I had a] big revelation that you have a choice. Only in the last five years have I really grown up. I’d been winging it before,’ Boy admitted, noting acknowledging others in an appreciative manner helped him get clear on life. ‘Oh my God- someone just put me in a hotel room and they paid the bill! I love this job! When you’re young, you just don’t notice. But gratitude is a big part of recovery.’

Chris Squire, the co-founder and bassist for the progressive rock legends Yes has passed away just over a month after it was revealed that he was suffering from a rare form of leukemia. Squire was 67. He was the only member of the group to perform on every studio album. Current Yes keyboardist Geoff Downes first tweeted the news, "Utterly devastated beyond words to have to report the sad news of the passing of my dear friend, bandmate and inspiration […]